The National Trust is as concerned with landscape as with architecture – seeing them both walking hand in hand.  In the UK, many priceless pieces of countryside and coast have been saved for posterity by generous donations because National Trust land is protected by law. It tends to remain protected because it is always open to the public. 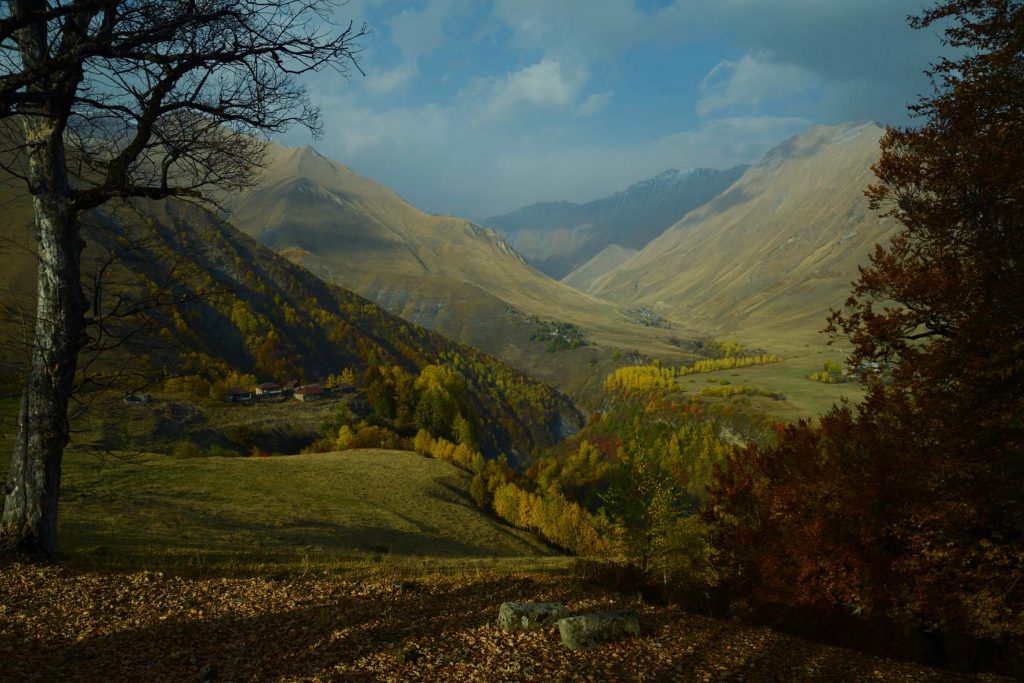 The Khada gorge, near Gudauri, in autumn. The new road will run right through the center of this picture.

The Khada Valley and Gorge is one of the most historically important valleys in Georgia. It is the original route of the Georgian Military Highway and is said at one point to have over 60 towers – most of which are now part collapsed. Additionally the valley has a rich religious significance – St Nino first declared Georgia as a Christian nation here. It is also one of Georgia’s most beautiful landscapes. This last point has to be emphasised – because unlike other mountain valleys with 12 month access, it remains completely authentic and not developed. Today it stands out as a pristine example of Georgia’s rich medieval inheritance – yet is only 1.25 hours drive from Tbilisi.

Because of this, over the last few years it has been attracting growing numbers of tourists, both Georgian and international, as hikers. This is partly due to its proximity to Tbilisi and partly the superb variety of one day walks in a wonderfully self-contained landscape. So much so that the valley and flanking mountainsides could easily become one of Georgia’s best, all year, eco-tourism venues.

The Khada valley lies right next to, yet is separate from, Georgia’s main ski-resort, Gudauri. From May to December, snowless and significantly developed Gudauri, becomes redundant and virtually economically lifeless. Few of the many hotels remain open and the local industry has to lie dormant until the first good winter snows in December.

By developing Khada’s trekking and eco-tourism opportunities for the summer hikers, Gudauri would gain a whole new economic lease of life – as happens in equivalent Swiss and Austrian ski resorts. This is the golden opportunity awaiting both the Khada Valley and Gudauri.

Georgia’s future economic success depends on its tourism. Vital to this is the attractiveness of its unique mountain architecture and heritage. Khada stands as one of its most powerful examples. The restoration of the valley’s historic towers would play a significant role in the country’s future as a cultural destination. This would further encourage the new, self-sustaining, ecological tourism which is rapidly gaining popularity around the world. To promote it would make Georgia appear a forward-looking, modern destination.

ALL THE POINTS ABOVE WOULD BE RUINED

If the Khada Valley is turned into a mass-transit corridor with a large, busy road, tunnel and bridges – along with everything that will accompany it and its construction. 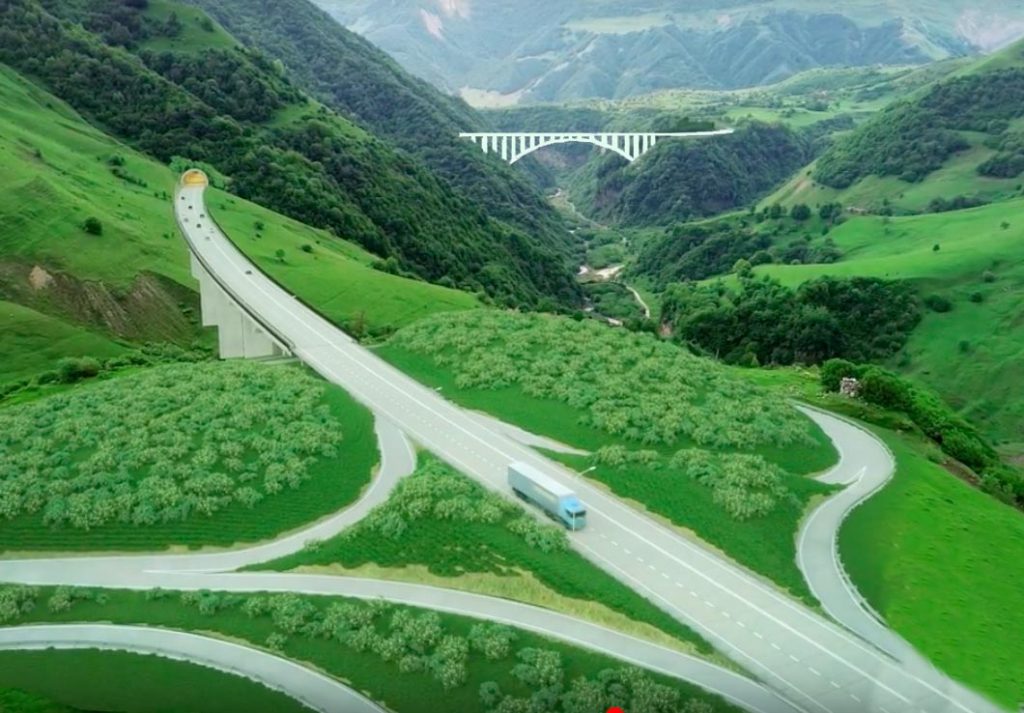 This is a screenshot from the Road Department’s own video of the proposed new road.

AND THERE ARE FULLY VIABLE ALTERNATIVE ROUTES

Instead of running straight up Khada (Corridor III), there are at least two alternative routes. One heads up to the Zakatkari plateau then steers away from Khada towards a different tunnel option beginning just below lower Gudauri (Corridor II). Its exit would be at the same place as the proposed road, near Kobi, about 10km away. This provides a much needed, new road up to the Gudauri ski resort but was rejected in favour of the slightly shorter Khada tunnel. The other (Corridor I) heads up the Aragvi valley, beside but not intruding on, the Protected Area cliffs, to a more geologically stable tunnel (away from the volcanic cone skirted by the other two Corridors). There is already significant hydro-construction in this valley, but it was rejected due a section of avalanche risk; but this could be allayed by a section of roofed shielding. Either of these would be far preferable to the Khada route. 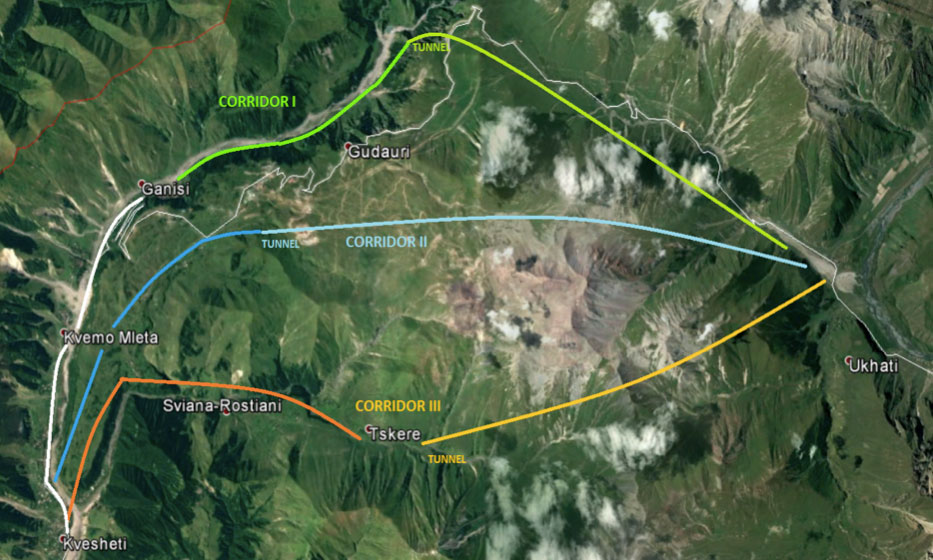 Corridor II (in blue) is the route that most people believe to be the best. This drawing is only rough, but it was taken from the Road Department consultation document.

Choosing this route would save one of Georgia’s most precious valleys and still provide the vital transport improvement between the north and south Caucasus.